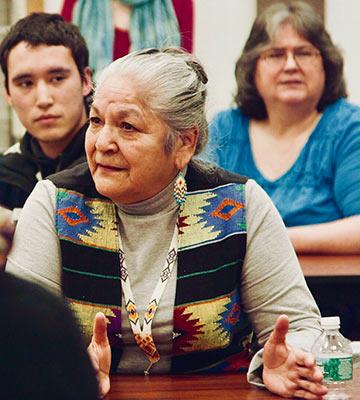 It’s not only in recent years that U.S. government agencies began separating children from their parents, as the second offering in this year’s KIPCOR Film Series makes clear.

The Kansas Institute for Peace and Conflict Resolution at Bethel College will sponsor a screening of the feature-length documentary Dawnland Nov. 17 at 3 p.m. in Krehbiel Auditorium in Luyken Fine Arts Center.

For most of the 20th century, government agents systematically forced Native American children from their homes and placed them with white families. As recently as the 1970s, one in four Native children nationwide were living in non-Native foster care, adoptive homes or boarding schools.

Many children experienced severe emotional and physical harm by adults who mistreated them and tried to erase their cultural identity.

In Maine, the first government-sanctioned truth and reconciliation commission (TRC) in U.S. history gathered, between 2012 and 2015, testimony about the devastating impact of the state’s child welfare practices on families in Maliseet, Micmac, Passamaquoddy and Penobscot tribal communities (collectively, the Wabanaki people).

With exclusive access to this groundbreaking process and never-before-seen footage, Dawnland reveals the untold narrative of indigenous child removal in the United States, and foregrounds the immense challenges this commission faced.

The film’s title comes from the fact that, living at the easternmost edge of Turtle Island, the Wabanaki are the first to see the new day’s light. If harmony and justice begin in the east, as some prophesy, the TRC must be a sign of this beginning.

Dawnland premiered in fall 2018 on PBS’s “Independent Lens.” The film is a multiple award winner including, most recently, the Emmy® for Outstanding Research at the 40th annual News and Documentary Awards, Sept. 24 in New York. Film score composer Jennifer Kreisberg was nominated for Outstanding Music.

“KIPCOR is especially excited to bring Professor Wildcat to campus to continue the working relationship and friendship we developed with him during a KIPCOR Consensus Council project in Lawrence from 2014 to 2016,” said Dan Wassink, KIPCOR senior mediator who coordinates the Film Series.

It is free and open to the public, with a freewill offering taken to support the series and the work of the Kansas Institute for Peace and Conflict Resolution (KIPCOR).