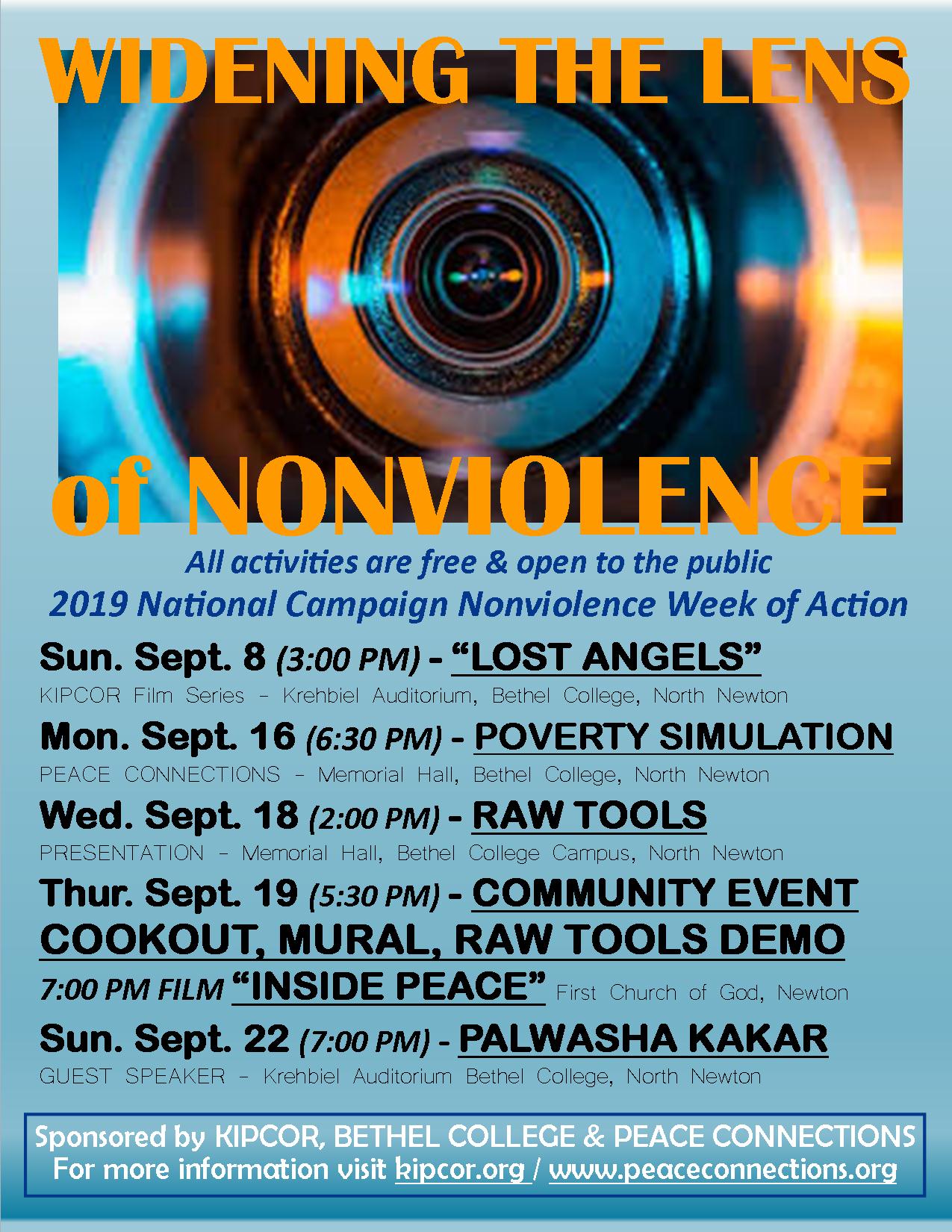 KIPCOR is joining with Peace Connections and  the Bethel College Office of Student Affairs to present a series of events for the 2019 Campaign Nonviolence National Week of Action. Please join us for these events!

All activities are free & open to the public

This highly-acclaimed film examines the plight of the homeless through the eyes of eight individuals trying to make a life for themselves within their Los Angeles community of homelessness.  The filmmakers show how a descent into life on the streets is often accelerated by the criminalization of homeless people, and changes within the mental health care system. Poverty is often overlooked as a symptom of violence.
Following the film, we invite you to stay to offer your comments and ask questions. Our post-film discussion will be led by James Wilson, Executive Director of the New Hope Shelter in Newton; and by a member of the Wichita Police Department’s Homeless Outreach Team.

Fast-forward through a month in the life of a family living with low resources Participate in guided role play. Discuss realities and the violence of poverty. Be part of the solution!

In this presentation during Bethel College Service Day, Raw Tools will do an interactive presentation. RAWtools, Inc. partners with communities in an effort to repurpose weapons for productive lifelong purpose. The materials from the weapon will be forged into new tools. Each weapon will be connected to its new purpose, creating a story that will travel with the new tool.

Students, faculty, staff, and members of the public will have the opportunity to share stories of the impact of gun violence. Students will also have an opportunity to work with Raw Tools to create the garden tool and any unused parts will be made available to students to create art pieces.

“Women’s Role in Ending Violence and Building Peace: Reflections from Afghanistan and the U.S Institute of Peace”

Palwasha L. Kakar is the senior program officer for religion and inclusive societies at the U.S. Institute of Peace (USIP). Kakar’s distinguished career began in Newton, KS where she earned a degree in Religion and Global Studies from Bethel College, and served as director of the Newton Peace Center (now Peace Connections). Kakar went on to earn a Masters degree focusing on gender, politics and religion from Harvard University’s Divinity School.

Kakar’s career has included significant engagement in Afghanistan, impacting a wide range of peacebuilding initiatives. Before joining USIP, Kakar, an Afghan-American, worked in Afghanistan with the Asia Foundation, the United Nation Development Program, World Bank Group, Kabul University, and the Afghanistan Research and Evaluation Unit. While in the region, Kakar specialized in peacebuilding initiatives related to religion, gender, security and local governance.

Please visit this page frequently for the most up-to-date information on these events.

All events are sponsored by KIPCOR, Peace Connections, and Bethel College Student Affairs