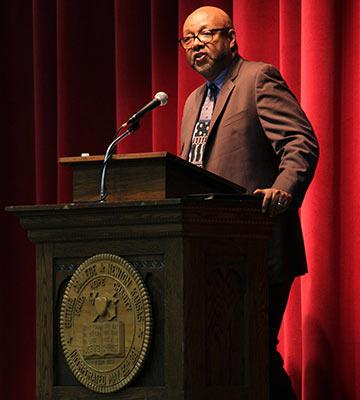 Leonard Pitts Jr., who spoke to a packed Memorial Hall on Sept. 12, 2017, comes back to Bethel virtually on April 25.

That evening, Mem Hall was more full than it had been in over half a century, when Martin Luther King Jr. spoke on the same stage.

Pitts’ lecture, titled “America in the Age of Trump,” was sponsored by the Kansas Institute for Peace and Conflict Resolution (KIPCOR), as part of its Peace Lecture series.

Now KIPCOR is bringing Pitts for a return engagement, albeit under pandemic circumstances.

The Pulitzer Prize-winning columnist for the Miami Herald will speak on “Is America Possible?” April 25 at 2 p.m., live via Zoom.

The Zoom link is available to anyone by going to kipcor.org and registering.

Pitts, well known for his liberal and progressive opinions, described an America less than a year into the Trump presidency, as more polarized than it had ever been.

He laid the blame on three factors: political gerrymandering, done by both Democrats and Republicans, and making it all but impossible for incumbents to be beaten or for sitting lawmakers to compromise; the mainstream news media’s abandonment of its role as “the umpires of American democracy”; and the Republican Party leadership, which chose to “[exploit] these stresses and dysfunctions in the name of amassing power.”

When Pitts gives “Part 2,” just a few months short of four years later, he could very well “look at us all and say, ‘I told you so,’” said KIPCOR director Sheryl Wilson.

Pitts spoke about two months before Wilson came to Bethel to assume her current role, in November 2017.

In his first lecture, Pitts shared one of his favorite quotes from Abraham Lincoln, from three years before the start of the Civil War.

Lincoln’s words expressed the belief that the United States would never be brought down by external forces but that “if destruction be our lot, we must ourselves be its author and finisher.”

It may be, Pitts said in 2017, that for the first time since 1860, the United States was facing the possibility of “destruction” once again.

A presidential election and a change in administration later, how will Pitts follow up?