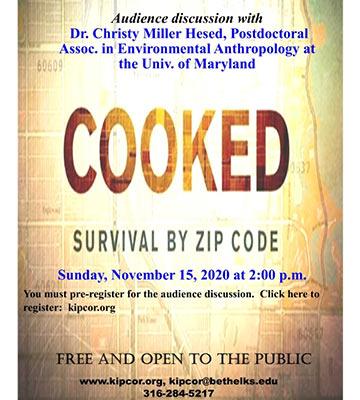 The next offering in the KIPCOR Film Series will look at the sometimes deadly relationship between climate change, extreme weather and personal income.

Cooked: Survival by Zip Code will be a virtual presentation, with the film and its talk-back taking place at two different times.

Cooked: Survival by Zip Code is a multiple-award-winning documentary that focuses on the deadly 1995 Chicago heat wave to illustrate how people of color and low-income citizens suffer the most negative impact from natural disasters.

The 76-minute film is an indictment of U.S. disaster preparedness, and forges a link between extreme weather, extreme disparity (of income and other factors) and extreme racism.

Note that watching the film and participating in the talk-back are two distinct, separate events.

You must view the film between Nov. 8 and Nov. 14, using this link and password: https://vimeo.com/bullfrogfilms/kipcor-cooked; password: KC30p0 (KC3-zero-p-zero).

Then on Sunday, Nov. 15, at 2 p.m., KIPCOR will host a virtual discussion of the film with Christy Miller Hesed, Hesston, a postdoctoral associate in environmental anthropology at the University of Maryland.

Cooked: Survival by Zip Code is adapted from Eric Klinenberg’s 2002 book Heat Wave: A Social Autopsy of Disaster in Chicago.

In the film, released in 2018, Peabody Award-winning filmmaker Judith Helfand uses her signature serious-yet-quirky connect-the-dots style to take viewers from the deadly 1995 Chicago heat wave – in which 739 mostly black, elderly and poor Chicagoans died over the course of a week – inside one of the nation’s biggest growth industries, disaster preparedness.